When launched, a merged server application called “myApp” will create a structure folder: 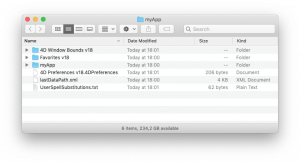 As long as your application keeps the same structure name (to maintain automatic updates or Windows service launch command) and evolves with different 4D versions, the structure folder is the same for each merged server application.

To avoid sharing this system folder between merged server applications built with different 4D versions (as shown in the above picture), you can now set the folder name during the build application process.

A new buildApp key is at your disposal to define your own structure folder:

As a result, if you set “myApp_v18R5” for your server built with 4D v18 R5 and “myApp_v18R6” for the one with 4D v18 R6 during the build application process, you’ll have separate structure folders in the system: