Project mode allows you to easily track changes with Git, the most popular version control system. But often, you don’t want to track all the files of your project in the Git repository. 4D now offers you the possibility to define what not to track in your new projects.

Git lets you specify the files you want to exclude from the repository using a .gitignore file. You can learn more about .gitignore files on the official Git documentation website.

From now on, 4D gives you the possibility to automatically add a default .gitignore file in your project folder. The file is taken into account at the first commit. A new checkbox is available in the preferences dialog: 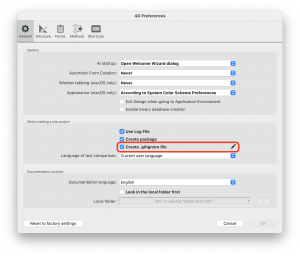 Once you activate this option, all your new projects will include the following .gitignore file:

And here are its default contents:

Reminder: Files and folders mentioned in the .gitignore file are case-sensitive.