Windows Remote Desktop Services allows users to open a Windows session or a RemoteApp, inside and outside the company network. By doing this, users can connect to their applications from everywhere through an internet connection. When the application is not optimized for Internet bandwidth usage, Remote Desktop Services are often used to limit it: no data is exchanged between the application and the server but only screen changes.

So, when several users open the same 4D Client merged application on a Windows server with Remote Desktop Services, local resources are downloaded by each user in its own user folder. There is then a copy of the same files in each user folder. 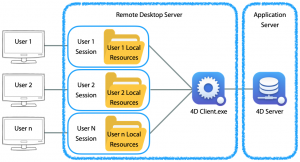 A new architecture at your disposal

To improve local data storing and transferring, 4D has developed a new option for projects in the BuildApp process to allow local resources mutualization. It is activated by this new BuildApp XML key:
/Preferences4D/BuildApp/CS/ShareLocalResourcesOnWindowsClient

The legacy behavior prevails if the new key has a “False” value or is missing.
And if this new key has a “True” value, the 4D Client merged application will use the local resources placed in this common path:
\ProgramData\{ApplicationName}\{ServerInformation}_ClientFolderSignature\
e.g. C:\Program Data\myApp\myApp_192_168_2_134_19813_157\

Note that the logs folder is still placed in the user folder to avoid concurrent writings.