Some word processors assume the most general case: the decimal separator is either a period (aka point) or a comma. If we rely on this and align the numbers according to the first separator encountered from the right, everything will be fine.
Other word processors use what is defined at the system level in the regional parameters.

To overcome this problem, starting with 4D v18 R5, 4D Write Pro lets you specify this setting for each document. You can choose to align numbers either to:

In order to maximize compatibility (with MS Word in particular) option #3 is chosen by default when creating new documents. When migrating 4D Write documents to 4D Write Pro, the system-defined separator is still chosen by default.

In any case, this option can be modified to adapt to each document. It doesn’t modify the document contents in any way. It only modifies the layout of the content, when displayed.

If you have documents from various sources, this option will probably be of great help! If not, then don’t change anything and everything will continue to work “as before”.

As you can see in the sample below, the number containing a point is not correctly aligned: 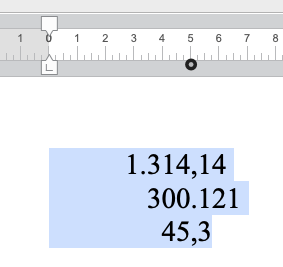 As long as a comma is defined as the decimal separator in the system, both of the following code samples will give the same result.