Typically when loading a record in a client application, all of the record’s fields are transferred from the server. Even ones that you don’t need. Therefore performance depends on your application design, your database structure, and the network capabilities … especially when using large tables with multiple or large fields. For example on a slow WAN, using just a few fields in selection-based list boxes (of tables with dozens of fields having many relations/fields and large text/pictures), your application will soon be out of service.

ORDA requests previously used the same field loading principle … until now! With v17 R5, the server analyzes the attributes you need in each dataclass and identifies the related attributes so that only the requested data is transferred between the server and the client.

To illustrate these improvements, let’s use a simple database: 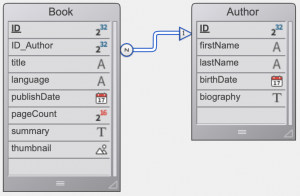 Using this database, we created two selection-based list boxes: one using an ORDA entity selection and the other using a classic selection. In each list box, we’ve chosen to display the book’s title with its author in order to activate relations. We’ve also added an action to automatically scroll the list box so no human action can disturb the results:

The measurements in the table below show the TCP frames that were transmitted between the server and the client (including all acknowledgment response) of the example in the video. The client’s network connection is Wi-Fi type “802.11ac” (250Mbps download, 100Mbps upload , with 1ms delay):

As you can see, using ORDA means only a few frames are transferred! And duration? The slower the network, the bigger the difference between ORDA and the classic approach.

This allows you to record what the system has learned, then reuse it later. To do this, you just need to create an option object containing a “context” attribute and then specify the desired value before setting the object as parameter:

This option object can now be used with the Create entity selection command and the following member methods: dataClass.query(), entitySelection.query(), dataClass.fromCollection(), and dataClass.all().

N.B: In the measurements table, we haven’t activated the context feature to be as accurate as possible.