4D v17 R4 is on the way with a cool new 4D View Pro feature: named ranges and formulas. If you need to use formulas with references to cell(s) or constant(s), this feature can be a great help!

With these new commands, your formulas are more readable and easily accessible with 4D View Pro’s automatic completion.

A named range is a human-readable label for a range of cell(s). You can easily apply a readable name with code to the cells you’re interested in with VP ADD RANGE NAME.

For example, in this document:

You can create a named range for each “sales” cell:

Then, you can use the named ranges in your formulas via automatic completion. They will appear automatically when you type the first letter of the name: 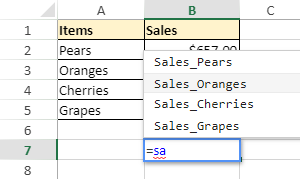 You can use VP ADD FORMULA NAME to replace calculations with readable names in your spreadsheets:

The same VP ADD FORMULA NAME command can be used to create a constant and make the calculations in your spreadsheet easier:

As we mentioned earlier, these names can be quite useful and as a bonus, you can directly use these names in your code with the VP Name command:

The two new commands allow you to manage your existing names: