Why should I write my own connection dialog?

There are several use cases for modifying 4D’s built-in connection dialog:

You want to customize the standard dialog for remote connections to the server.

When deploying your application and creating several distinct databases. For example, a different database for each subsidiary of a group. In the connection database, you can manage which servers and databases users can connect to and allow them to connect directly.

Another way of using a custom dialog is to choose which archived fiscal year database users can access.

If you deploy several products and want your users to use a single “portal” application to connect to each product.

A software publisher has a server farm hosted in the cloud with each server corresponding to a specific business need. Previously, they deployed as many remote applications as the number of users that could access the servers. Now, they can they can deploy a single remote application for all servers with a “directory” database. Using HTTP requests or remote datastores, each server sends its status and connection information to the “directory” server. The connected merged application can then query the directory database, view a list of available servers, and connect to one.

How to do that?

First, you need to create a connection database containing your own connection dialog. The OPEN DATABASE command has been extended to permit connecting to a 4D Server. Generate a 4DLink file containing the server location and port, then pass it as a parameter to the command. The standalone application will automatically stop its code and connect to the server, becoming a typical remote application.

Here’s a code snippet from a server selection dialog where Form.selectedServer contains the 4D Server information:

When your connection database is ready, you just need to build a compiled database.

This is a merged client application structure without an embedded database (“legacy client”): 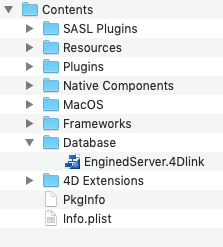 This is a compiled connection database:

And finally, this is a merged client application structure:

HOW DOES IT WORK?

At runtime, the merged client application will open the embedded connection database and then allow the user to select the merged server to connect to. If a default data file is used, it’s in read-only mode.