When it comes to major product releases, 4D pays close attention to the color of the logo for each one. Since 4D v18, one of 4D’s most revolutionary releases is just around the corner, we’ve decided to reveal the story behind the choices made not only for the logo color but also for modifications to the shape of the icons! Here’s everything you need to know about 4D v18’s logo color, as told by creative designer: Julien Banon.

Beginning with 4D v15, we turned the chromatic circle counter-clockwise to choose the next logo color. Based on this logic, the color for 4D v18 should be located either at the border between green and yellow, or yellow-orange. In other words, somewhere in these color ranges:

Every year, the Pantone Color Institute promotes a color by studying the evolution of the use of colors throughout the previous year in several fields: fashion, marketing, design, social media, and even politics. For 2019, Pantone’s Color of the Year is Living Coral.  It’s well known that since the 2000s, the color of the year influences brands, companies, and products. The color is in the right range for us, but too similar to 4D v15’s logo:

Here’s our mood board for finding a shade close to the Color of the Year’s coral, but distinct from the red of the 4D v15’s logo:

We’ve chosen a shade that’s less intense than previous versions. The color of 4D v18 will be: 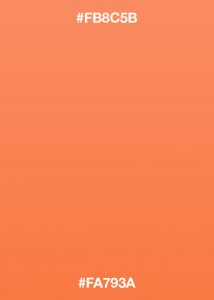 The shape Was upgraded as well

The first thing to notice is the addition of a border. This was done to ensure that the logo always stands out regardless of the background color, as well as being more in line with the new icon design trend for Mac. 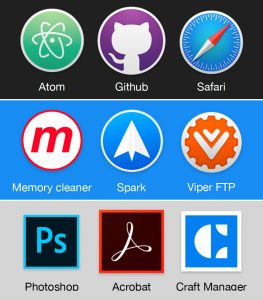 We’ve also redefined the 4D lettering inside the disk: As shown in the image below, the previous logo was not centered, creating an imbalance in some formats (especially in the toolbar). 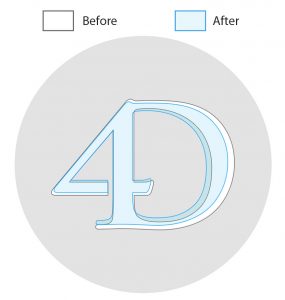 Without further ado, here is the logo in action. Ladies and gentlemen: Coral is the new blue!