For many years, 4D has allowed you to develop binary databases as part of a team with 4D Server. This way of developing is straightforward, but many developers asked us to be more efficient in source code management for better traceability. We heard you, and we developed project mode to fit this need.

This guide will help you understand how Version Control Systems work and how they could benefit you. It’s divided into four sections:

Version Control Systems (VCSs) are designed to manage source code based on text files. Many version control systems exist, and they all answer important needs in professional development environments:

With binary databases, 4D Server fulfilled both roles of data server and source code server. Since the source code was integrated into a monolithic binary file, no VCS could manage source code history.

Following that, 4D imagined an architecture that could benefit from VCSs and make development easier and safer for teams: Project mode was born. This mode transforms the monolithic binary file into several text files, each one representing an element of the original database (methods, forms, resources, settings, …). A VCS can easily manage 4D projects and take charge of the source code management part of 4D Server.

We won’t base this guide on a particular VCS tool, because the possibilities offered are similar from one to the next. The differences between those systems are mainly their architecture, which we’ll explain in this overview.

Keep in mind that the way you develop with projects in a team doesn’t impact the deployment and execution of compiled applications with 4D Server or merged 4D Servers.

Finally, this guide is not only for team developers: the benefits of using VCSs in team development are also relevant for single developers!

What is A Version Control System?

As we’ve seen in the introduction, the main goal of all version control systems is to answer important needs in professional application development:

Version control systems use two major architectures: centralized and distributed. Both can fit your needs depending on your team size, business, and processes.

A centralized version control system retains a central copy of the project in a single repository and commits changes to that central version. Centralized Version Control Systems are based on a client/server architecture.

Every developer on the system has access to information about the work of other developers working on the project. It is easy for beginners to deal with a centralized version control system because it is very similar to 4D Server with binary databases.

While developers can work concurrently, the system only publishes the latest version of the file. Issues can take place if two or more developers simultaneously make changes.

The most common centralized version control system is Subversion, aka SVN. 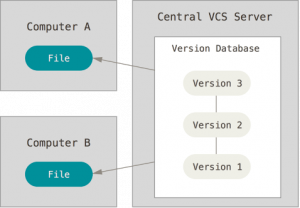 A distributed version control system has different functional elements for collaborative editing and sharing, which allows each developer to manage their own repository. Distributed Version Control Systems use a peer-to-peer  approach to version control, allowing developers to work productively when not connected to a network. This system works to avoid stepping on or overwriting others’ work and provides document history preservation and reversion capabilities.

The most common distributed version control system is Git. 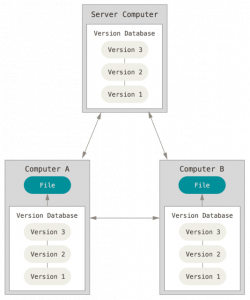 Which one to choose?

The choice depends on your comfort with VCS concepts.

Centralized VCSs are probably the closest setup to what you already know with binary databases on 4D Server.

Distributed VCSs have been the most widely used for many years, and many developers moved from centralized to distributed. So even if you’re not familiar with VCSs, you can choose a distributed one. You’ll be able to use it as a centralized VCS (you can determine a central repository that will be your source code reference).

For VCS newbies, here are three basic actions that are used in all VCSs, and that we mention later in this post:

This chapter will show you the benefits of using a VCS, depending on your programming habits.

As mentioned in the introduction, the benefits of using a VCS is not limited to development teams. Just because you develop applications alone doesn’t mean you don’t want to follow industry standards!

The first advantage is traceability. You already know who made changes to your source code —it’s you—, but knowing exactly what, when and why is very useful, especially when you’re trying to retrieve the information years after you’ve made the changes!

And for additional security, you can define a remote backup repository to avoid hardware problems on your computer. It’s up to you whether this remote repository is placed in another computer or server, in a private or public cloud, or a service.

Setting up development teams on binary databases with a 4D Server was an elementary task, but this simplicity had a cost. There were some limitations on the development process!

Everyone working in that environment encountered locks of methods, forms, or resources by another team developer. Usually, the work had to be clearly defined for each developer in order to avoid these locks.

But some resources are often used by all developers in the team. It’s the case for the structure editor, the toolbox (for menus, style sheets, and so on) or database methods. And the list is not exhaustive!

Who hasn’t tried to add a variable in a compiler method, just to realize that another developer had already opened that method?

With a VCS, there’s no risk of affecting your colleagues’ work, because you can work and test on your computer, and then push the source code on the shared repository when you’re finished. It offers better shareability.

The main benefit of these two examples is that each modification doesn’t affect other people’s work until it is shared with them. Now it’s the developers who decide when the source code must be shared with the team, not 4D.

Development outside the office

Using a VCS allows you to work locally on your computer. It doesn’t matter if you’re at the office, at home, on the train, or on the beach!

You can now work offline and push your tested modifications on the shared repository when you’re back online. Moreover, as the VCS pushes only modifications, it’s faster than synchronizing the whole binary database, and less bandwidth is required.

Sometimes, you want to debug code on the server-side, such as triggers, stores procedures, or methods executed on the server. To enable this, 4D allows a remote 4D connected to a 4D Server running on the same computer session to modify the source code. In this configuration, the remote 4D handles the local source code files directly,  instead of the downloaded 4DZ file.

Having each developer working with their own remote/server application is much safer than a whole team modifying the same shared source code on a binary database with 4D Server. Indeed in this last case, problems described above (Team-based development) are likely to occur.

To test server code with a binary database, developers often needed to first add a TRACE command in the method executed on server, then connect to the development server with a remote desktop session, and finally debug directly on that server.

And what about the developer who has left for a meeting or lunch and left the method opened on his or her computer, blocking all the other developers? This real-life situation cannot be encountered when using a VCS and developing locally. With projects, developers are autonomous and can develop and test without impacting the work of other developers.

Using a 4D Server for development

Sometimes, you need to use a 4D Server for development. Not for managing source code (it’s now handled by the VCS), but to serve data that can be too huge to be used locally. To verify ongoing developments and check that the modifications perform the expected result, a reference data set is often used on development servers.

To allow this, you need to go through a few steps:

Using a 4D Server for testING

Using a test environment before deploying an application is a best practice. Using a 4D Server with projects for testing purposes is very similar to doing it for development.

Once the test server repository is connected to the shared repository, you can pull the repository, call RELOAD PROJECT to make sure the 4D Server is up to date, and launch the test procedure. Simple, isn’t it?

Changes on AN interpreted 4D Server in PRODUCTION

Sometimes, a 4D Server is used with binary databases executed in the interpreted mode in a production environment. Typically, developers encounter this use case when they want to quickly perform changes in production (add a feature, fix a bug). Such actions must be performed with the highest precautions, as each source code modification in production will directly impact… in production. Which can be undesirable if such changes have not been thoughtfully tested in the first place.

When a developer adds changes to the source code, all the remote 4D of the production environment are in an unsafe logic state because they execute processes and forms designed to call the previous version of the code currently modified. For example, when a developer modifies parameters on a method, every remote 4D calling this method may encounter errors until the method calls have been changed too!

To set up such an architecture with projects, you have to follow these steps:

4D has developed Project mode to answer major needs raised by many 4D developers, centered around managing source code’s traceability, security, and shareability. These needs couldn’t be answered using the binary format. With projects, 4D allows you to use version control systems that are standard, modern, constantly evolving and frequently used in the software engineering industry.

But keep in mind that project mode in 4D is not only dedicated to VCSs. It improves how you approach development, paving the way for object-oriented development with classes, form macros, native Silicon compliance, and many other great features to come!

In this post, we described how to answer use cases when you want to transition from binary databases to projects and have little knowledge of version control systems.

We’ll see in another post how to set up repositories adapted to specific situations and development modes, and we’ll present another great feature of VCSs: branches.

More general information on VCSs can be found on the following websites: