Encryption is an essential part of your 4D data protection and your organization’s strategy, especially with GDPR, HIPPA, Sarbanes-Oxley, and PCI Data Security Standards. 4D provides a powerful built-in encryption solution to help you comply with different privacy laws and regulations while keeping your and your customer’s data safe and sound from intruders.

This document provides a deeper look at how 4D encryption works so you can use the feature to its fullest potential.

4D offers several great avenues for keeping your data secured. One of these avenues is to secure the data itself using dedicated built-in encryption. Just as we lock and restrict access to our homes in the physical world, we rely on encryption to keep intruders away from our data. Data encryption is the mechanism of transforming readable data into an encoded form so that only the person with the data encryption key can read and update it. So, if the database is stolen, the thief would have no way of opening and reading or extracting your data without also having the encryption key.

Let’s take an example of a 4D application; when opening a .4DD file in an external editor, it was previously possible to guess some of the data content.

Now edit your .4DD file. You can recognize your data:

But that was then…

Now with 4D’s encryption, once data is encrypted, it becomes completely unreadable:

Why should you consider 4D data encryption?

4D’s built-in encryption was designed with performance, robustness, and simplicity in mind.

Compared to many other products, the 4D solution delivers better performance since, instead of encrypting the entire database, 4D offers table-level encryption, which results in a low to no impact on performance. That’s why it’s recommended to group sensitive information into targeted tables.

In addition, 4D encryption uses a 256-bit key instead of the 128-bit, which is used by products similar to 4D. That 256-bit key is much more robust from a security standpoint (as explained in this section). Stronger keys are harder to break for attackers. As a result, a brute force attack is much less likely to succeed against 256-bit encryption.

All this power was built beneath a veneer of simplicity; the 4D encryption process is made as light and straightforward as possible for 4D developers and administrators by:

How Does 4D data Encryption work?

the algorithm and technology behind

Generally, the encryption and decryption algorithms are the same. The key is used when encrypting the plaintext and when decrypting the ciphertext. The choice of the key is essential because the algorithm’s security depends directly on it.

Encryption algorithms can be divided into two categories: 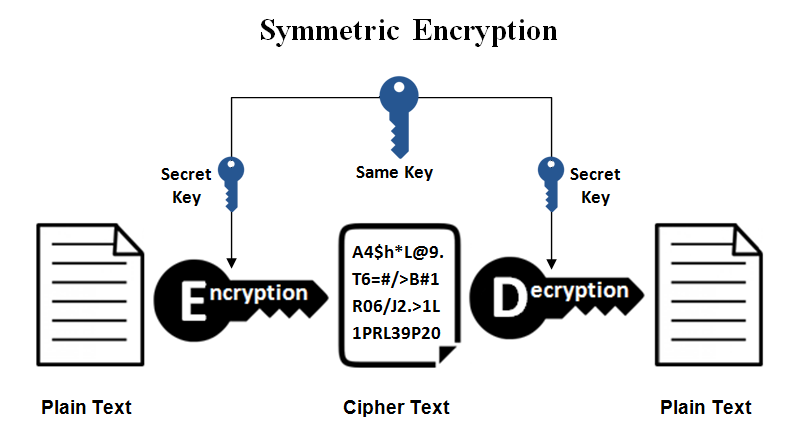 As for the encryption process, it’s based upon a simple, two-step scenario:

As for the decryption process, when a data file is encrypted, the developer can work transparently with the flexible key management system 4D provides (4D KeyChain). Once a data file is opened, 4D will automatically check the 4D keyChain for a valid key.

If there is no valid key, the search is performed for a possible device (USB keys or disks). If a valid key is found, it will be stored in memory in the keyChain, and access is given to the encrypted file. Suppose no valid key is located in the keyChain or in a device. In that case, there will be no access to the encrypted tables unless the developer provides an interface to type the passphrase to provide it to the database via the provideDataKey() command.

The only access to non-encrypted tables is possible if no valid key is provided.

This diagram summarizes the process: 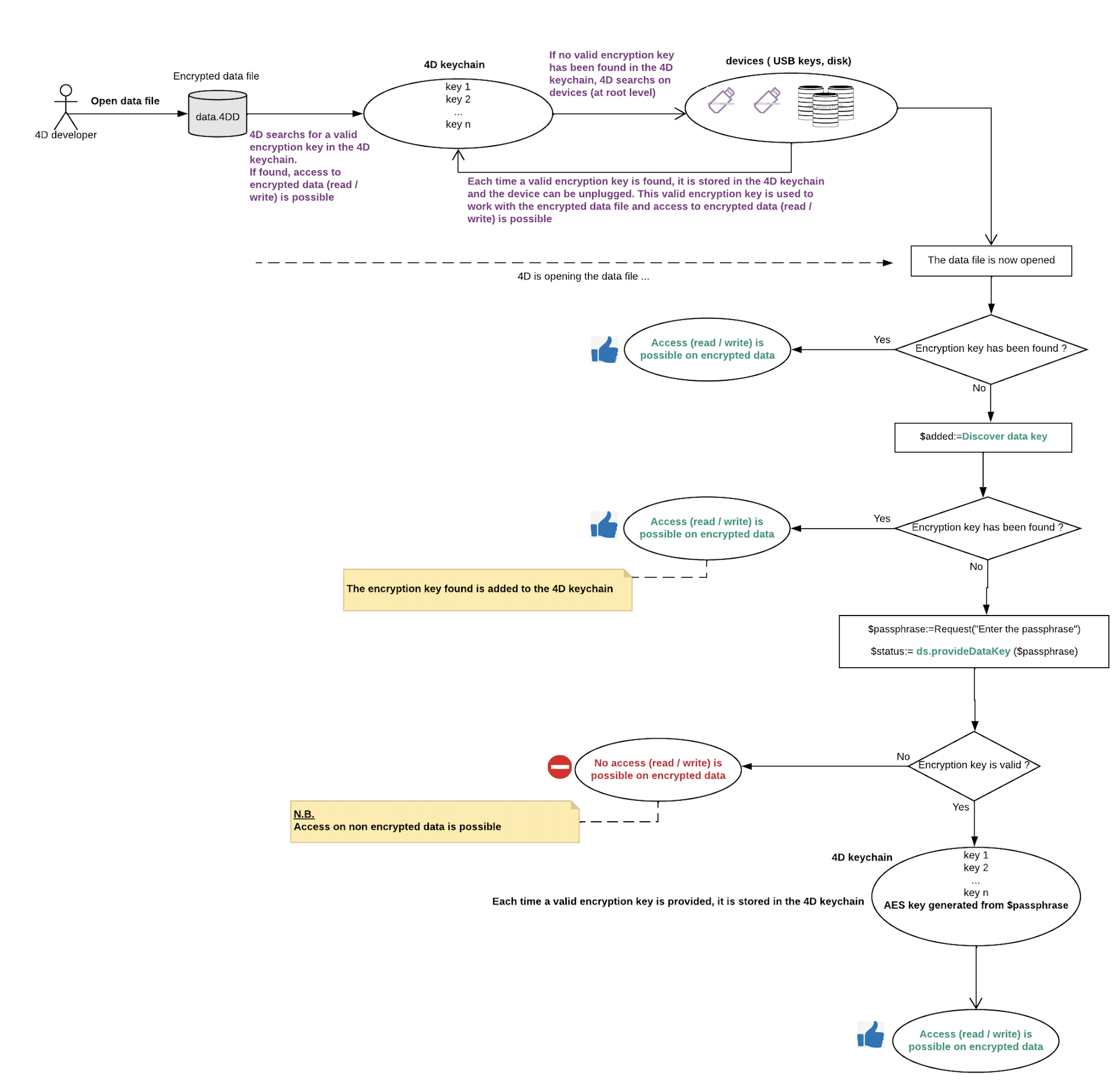 4D keyChain is a flexible key management system provided by 4D. It’s a space in memory where the encryption key is stored. As long as 4D is not closed, it’s possible to open and close data files without communicating the key again.

The .4DkeyChain files can contain several keys. The key will be automatically detected when the device is connected when opening the database. As soon as a valid key is detected on a device, it will be saved in the keychain so that the device can be disconnected while using the database. This also allows working with several data files without entering their passphrase. The command, Discover data key(), also allows scanning a device to find a valid key if the device has been plugged in after opening the data file.

A note about journal and backup

A journal is associated with each data file. This log traces all the actions carried out on the database. So, when you want to encrypt a database, you have to associate a new log with the same encryption key as the data. The encryption involves the data, the journal, and the index files. Keep in mind that the backup is also impacted by encryption. The resulting backup file will also be encrypted if a backup is made on an encrypted database. Of course, the encryption key will be required if the backup file is restored.

In client/server mode, you have to provide the key to the database opened on the 4D Server. This makes encrypted data available to all clientsr. To do this, you can either:

The second method can be run from a remote 4D.

How to use 4D encryption?

Encrypting your 4D data is straightforward: First, choose the data to encrypt, then encrypt it via the MSC or dedicated 4D commands.

The new Encryptable attribute is available for tables in Design Mode. Encryption is not executed here; this sets the encryption status by designating that it can be encrypted. 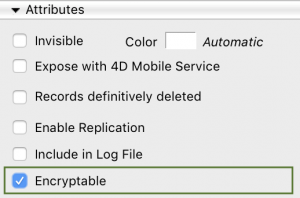 You’ll then be asked to choose a passphrase.

The MSC Encrypt page provides all of the necessary features to monitor your data encryption. You can use this page to encrypt, decrypt, re-encrypt the data file and change your passphrase.

Using dedicated 4D commands is an additional way to work with encrypted data files. These commands are designed to support most encryption requirements and enable you to deliver an encrypted solution to your customers. They are also beneficial when the MSC is not accessible, such as when the database is launched as a Windows service.

4D puts  seven commands at your disposal to get up and running:

Here is a database example to see these commands in action. If you are using 4D v19 and above, use this one as it supports modern code.

Where to go from here?

Many resources are at your disposal for a deep dive into this topic.

Note: Please feel free to share your feedback with us on the 4D forum and your experience using the encryption feature. We are looking forward to reading you 😊

What happens if I lose my decryption key?

If you lose the decryption key, access to that data is permanently lost.

Is performance affected by encryption?

Compared to other products, the 4D solution delivers better performance since, instead of encrypting the entire database, 4D offers table-level encryption, which results in a low to no impact on performance. That’s why it’s recommended to group sensitive information into targeted tables. Also, note that decrypting the records is done between the disk and the cache. Once in the cache, the records are not encrypted anymore. The same is true for the index pages because their content is also encrypted on the disk.

How to restore a backup that has been encrypted with an old key?

If you wish to restore a backup that has been encrypted with an old passphrase, you must remember this passphrase to access the restored encrypted data.